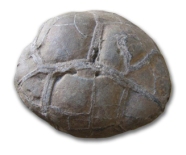 A “concretion” refers to a type of mineral deposit, where layers of precipitated minerals are attracted to a starting nucleus (such as shell or bone) – much like how a pearl forms. Generally this occurs in water-rich environment, where there are minimal restrictions or obstructions to the concretion growth, resulting in a round shape. Numerous concretions may start growing near each other, then merge to form larger masses.

These particular concretions contain angular cracks and cavities. The word “septarian” comes from the Latin word septum, meaning a wall or partition, referring to the cracks riddling through these concretions. It is believed the cracks are formed from shrinkage of material – where the outside deposited material is denser or hard, while the innermost material is softer, which shrinks and cracks over time. These cracks are then filled with precipitate minerals such as calcite or siderite. 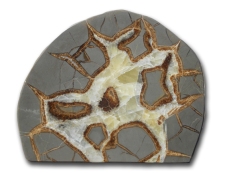 Septarian nodules are common in the northeastern part of North Dakota, near the Pembina Gorge. As they weather out of the ground, the softer, original concretionary material erodes faster than the cracks, giving the nodule a turtle-shell like appearance. These are often mistaken for fossils.