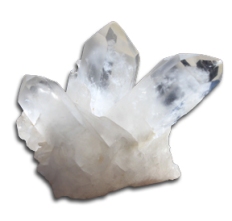 Quartz is a very common mineral, with numerous shapes and colors. For as long as people have enjoyed shiny things, quartz has been used in jewelry and carvings. Different types of quartz include: chalcedony (white, lightly colored), agate (multi-colored, banded), onyx (agate with straight, consistent bands), jasper (red-brown), aventurine (chalcedony with shimmering inclusions), tiger’s eye (gold to red-brown), amethyst (purple), citrine (yellow to orange), prasiolite (light green), rose (pink), smoky (brown to gray), carnelian (red-orange), and others. The biggest difference in forms is whether the mineral is macrocrystalline (showing individual crystals), or microcrystalline (tiny crystals, visible under magnification). Transparent varieties showing good crystal forms such as amethyst or citrine would be macrocrystalline.

Quartz can be found as a component of many other rocks and minerals – granites, sandstone, and schist, for example. Crystals are generally six-sided, but commonly twin. It is a 7 on the Mohs scale, with a white streak. The chemical formula for quartz is SiO2 . As the second most common mineral found on earth (the most common being feldspar), quartz can be found world-wide.

It is piezoelectric – meaning it generates an electrical charge if put under stress. It is used as an oscillator in radios, watches, gauges, etc. Quartz sand is used to make glass, as well as a sandblasting abrasive.

Amethyst is a purple variant of quartz (yellow = citrine, green = prasiolite), with its color coming from iron impurities. Its name comes from the Greek “a-“ (not) and “methystos” (intoxicated), stemming from the belief that the stone protected against intoxication. It was also thought that the stone would make a person more clear-headed. Amethyst can be found world-wide, with large deposits found in Brazil, South Korea, Austria, Russia, and numerous other countries. Before large deposits were found, this stone used to be lumped with diamonds, rubies, and sapphires for its rarity and preciousness. With a hardness of 7 on the Mohs scale, it makes a good gemstone – fortunate, as it is the birthstone for February. Cutting the stone properly can be challenging. The crystals do not often have a uniform concentration of color, but vary in shades of purple and mauve. These crystals are often found in geodes – some of which are massive in size.