Discovered in 1967 in Tanzania, tanzanite (named by Tiffany & Co.) is one of the more recent birthstones for December (as of 2002, via the American Gem Trade Association).  While the stone may be light violet in some cases, darker shades of periwinkle with hints of purple are sought after for higher gem quality.  A blue variety of the gemstone zoisite, tanzanite has a Mohs harness of 6.5-7 – not particularly tough for a gemstone.  Corundum (rubies and sapphires) sit at a healthy 9.0 on the Mohs scale. 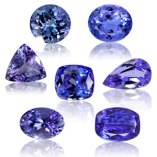 The blue color is caused by trace amounts of vanadium within the ziosite – much like trace elements can also cause various colors of diamonds.  The blue can be enhanced and brought out in the stone by careful addition of heat.  Tanzanite crystals are also pleochroic – meaning from different angles they exhibit different colors.  The same crystal from one direction may look blue, and another direction look red or brown – thus faceting the stone can be challenging.

The chemical composition of tanzanite is:  Ca2Al3(SiO4)3(OH)