I.  We met on March 13th, 2016 at the Bismarck Public Library. Officers present included President Kevin Vetter, Vice President Tom Tupa, and Treasurer Vic Wingerter. Twenty six other members were present. President Vetter called the meeting to order, and we addressed the flag.

II.  Treasurer’s Report: CDG&MC has $7,629.41 in the bank. $40 was just donated to the club from the North Dakota Gold Panning Association. There have been 18 new members added to the club since the October Rock Show. Vic handed out club pins, patches, and name tags to new members.

After-meeting program: Tom Tupa brought in a rock tumbler and some samples showing various stages of polish. He went through a thorough description of the basics of rock tumbling and equipment available. 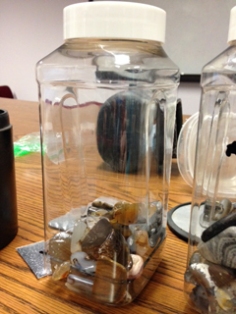